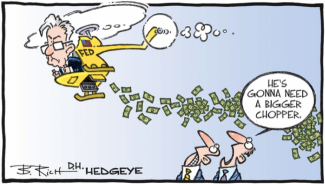 Is the Fed’s Intervention a Grand Illusion?

Most of us are all in the same boat in wanting this viral lockdown to end, and for many of us to get back to work and conduct our business as usual. We all want the financial markets to stabilize and confirm that the worst is behind us. But from the looks of the economic data, we’re not there yet. Furthermore, the underpinnings of the financial system, mainly corporate solvency issues are very much in play, and the economy overall is still in a significant decline.

But, Central banks around the world are trying to save the day with the Federal Reserve at the forefront, promoting the idea that a “V” shape recovery is intact, and, don’t you dare fight the Fed. But as we look at the Fed’s balance sheet, the level of Bank Reserves has exploded by $1.49 Trillion in the past eight weeks, which is a rate that is almost triple of what Ben Bernanke was doing in the 2008 crisis period. It seems that Wall Street and the talking heads on CNBC would like you to believe that this is the magic medicine for the stock market and the banking system. But if you look back at the 2008 period and the money printing that Ben Bernanke was doing, it didn’t work. So, even though the Federal Reserve, under Ben Bernanke, engaged in hyper money printing during 2008, the financial system continued to melt down and asset prices melted down all the way into 2009.

By June of 2008, after all of the previous monetary easing and Fed interventions, the Fed and Wall Street were boasting that the Fed had what it needed to provide the cure. The rest was history as the collapse was underway in later October.

The point being is, the investor should be cautious of this tactic working, and just because they are once again bloating the balance sheet at a record pace, it historically hasn’t worked. The Fed is making an effort to make us believe that they can have a sustaining long term effect on asset prices. But what we can conclude from this unprecedented action of printing $1.5 trillion in the course of eight weeks, is that something is very wrong within the system. Judging by the magnitude of the action, it may be worse than 2008. Arguably, in a sense, it is simply a selling job to convince the investor community that it does work.

But as Jeff Snider of Alhambra Investments discussed in his recent article, the real problems lie within the shadows of the Eurodollar system, in that, there is a massive liquidity hole within that system. The Eurodollar system is rarely discussed in the mainstream media. The Eurodollar system is a global system that operates without regulation, and is influenced by many entities, and indirectly and directly affects assets prices globally. It can be viewed as a deposit and loan market for offshore dollars. The Eurodollar system is the wholesale financing system that is the most used in the world. It is the Mothership. This system is a critical component to how banks fund and manage their liability structures and is a cashless system. It is comprised of Banks’ balance sheets. The Eurodollar system is reportedly very distressed, as it was in 2007 and 2008. So, even though the stock market has rebounded off of the recent lows, the LIBOR market (London Inter-Bank Offered Rate), nor the bond market is buying the notion that the worst is over. Additionally, if the Fed just printed $1.5 trillion in base money, and all that has happened is the LIBOR rate has dropped only by a half a percent, then the problem must be much bigger than that.

This also explains why there isn’t the inflation that people are expecting. It just isn’t happening. In fact, deflation is a more likely scenario. There is a mindset that this is a result of the Covid-19 pandemic. Although, this global economic shutdown taking place has no doubt crushed the economy and has severely exacerbated the situation within the financial system, the problem within the shadows of the Eurodollar system was already underway. The Fed, beginning at the end of Q3 of last year was starting to ramp up asset purchases and flooding the banking system with cash to keep the REPO market afloat. The onset of the Covid-19 pandemic couldn’t have been at a worse time.

But what about Chairman Jerome Powell’s stated pledge that the Fed is absolutely committed to propping up the capital markets by purchasing junk bond ETFs, Municipal ETFs, and bailing out whatever needs to be bailed out? Isn’t that different than what the Fed did in 2008? Well, yes, but is this a normal sensible thing to do, or is it a sign of desperation and how serious the condition is within the financial system? Apparently, the word within some channels is that the “Fed” never purchased any ETFs, but rather, they provided some “jaw-boning” to make investors think that they were so they would rush in and try and front run them. I consider the possibility that another central bank may have done so, rather than the fed. The Fed reportedly sent out a tranche of money to Central banks in March. Whatever the case may be, it’s a sign of desperation and ruins “price discovery” within free markets. Besides which, it encouraged corporations, such as Boeing, to issue a load more of corporate debt ($25 billion), which it issued in the last week of April. It’s as if the Fed continues to be the enabler of more debt issuance. So, this maneuver is potentially nothing more than a game of trying to convince the investor that they can prop up asset prices. Besides, if one thinks that the purchases of ETFs by Central Banks will ultimately work, just take a look at the Nikkei stock market where the Bank of Japan owns 75% of the index and it has still declined. 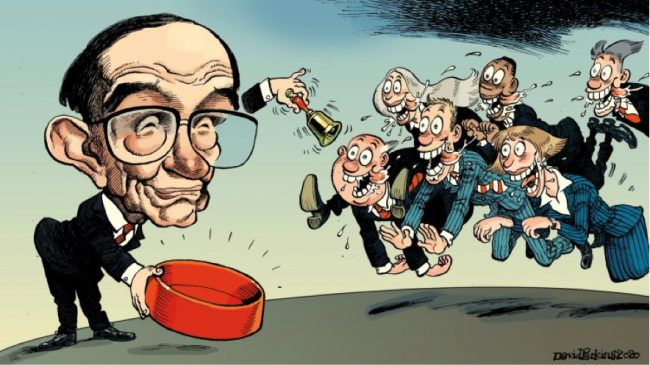 The other aspect of this current financial crisis is the issue of solvency versus liquidity. Yes, when panic within the financial system rises, liquidity dries up quickly. But solvency of companies and big investors, may be a bigger problem and one that the Fed cannot control. When an economy such as ours is abruptly shut-down causing revenues, earnings, and employment to crash, solvency becomes the issue and can cause the financial system to melt down very quickly. Credit defaults may pile up, as a result. The participators on this list include Commercial Mortgage Backed Securities, auto loans, student loans, residential mortgages, municipal debt, and corporate credit. These sectors of credit are beginning to breakdown, and default risks are rising. According to an article posted on PEW’s website, total student loan debt now exceeds $1.64 trillion, and 20% of the borrowers are in default, as of December of 2019. With a collapsing economy and rising unemployment, we can expect this rate to rise. Within the Commercial Mortgage obligation space, many investors of apartment complexes and other commercial buildings have leveraged these investments with mortgages. An estimated 30% - 40% of renters are not paying their rents, as of April. An investor in apartment complexes that has borrowed to fund these investments may now be suddenly experiencing a 30% - 40% loss in revenue and maybe unable to pay on those mortgages.
With Respect to Municipal debt obligations, the solvency of states and municipalities will likely be more in question as revenues continue to crash and those debt obligations become under more pressure.

The point being, the Fed or another central bank, may have swooped in and bought Muni ETFs, Junk bond ETFs and CMBS ETFs, to temporarily prop up the prices of those securities, but they can’t prevent defaults.

The Predicament with Oil

The events that took place recently within the oil market was a stunning sight to see, as the price for the May oil contract crashed into negative price territory – An event that has never occurred. Furthermore, the investment product known as the United States Oil Fund (USO), which is comprised of a basket of 3 monthly oil contracts, nose-dived in value, and even halted in trading, at one point.  As the demand for fuel consumption has crashed due to a massive decline in economic activity, the supply of oil reserves continues to mount and the world is literally running out of capacity to store additional oil production.

As Jim Bianco recently explained on a recent interview on Macrovoices, normal national gasoline demand in the U.S. requires an average of 10 million barrels of oil a day to produce it. But now the crash in demand has dropped production down to 6 million barrels a day. In the week of April 10th, the “inventory build” on domestic oil rose by 20 million barrels, which was the largest build on record. The following week of April 17th, the inventory build was around 15 million barrels. Our current domestic oil storage capacity is running at 86%, and is quickly running out. Floating ocean storage is at full capacity.

Here’s the predicament: storage is running out while producers in the U.S. have to keep pumping oil to keep the wells healthy. They can reduce their volume, but they have to keep pumping. They could cap the wells, but it is costly to do so, and they prefer not to. Enter the USO fund and the individual investor, by some research, have been pouring into these investments without a full understanding of what they are. A futures contract has an expiration date, and upon that expiration date, delivery is taken. No suppliers want to take the oil, the producers want to keep pumping oil, so the producers are willing to sell the oil to the individual investor. The risk is that these contracts within the USO fund won’t be able to be sold before expiration, and the investor may be in jeopardy of taking delivery, because the fund potentially won’t have any buyers of the existing contracts, in time to escape expiration. This would obviously cause a massive dislocation within the market. Let’s hope consumption rapidly ramps up soon.

The U.S. stock market has made a wild journey, so far this year, packed full of volatility. The better performing equity index this year, of course, is the S&P 500 Index, primarily due to the 5 companies within the index that include Microsoft, Google, Amazon, Apple, and Facebook. As illustrated on the chart below, as of April 23rd, these 5 companies account for 20% of the market cap within the S&P 500. Fortunately, these stocks have been carrying the earnings and price performance within the index, relatively speaking. A vast majority of the other companies have experienced lousy price performance. 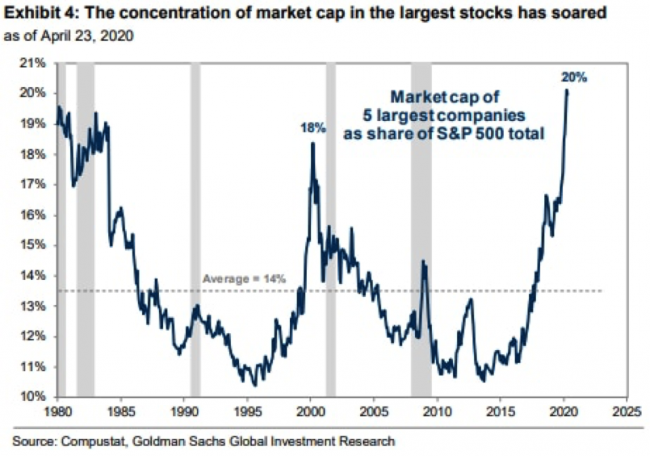 Earnings for Q1 for companies within the S&P 500 are still showing a decline in year-over-year growth. With 279 companies reporting, out of the 498 listed in the S&P 500, earnings have, overall, declined -8.98% and revenue has grown a paltry .98%. In the age of Central Bank manipulation, multi-trillion dollar giveaways, and the majority of market volume generated by “robots”, the market has managed to gain 26% from the interim bottom that occurred on March 23rd. So far, the market has recovered approximately 51% of its decline. Many have declared that the bottom is in and the worst is behind us regarding market declines. The FOMO, “fear of missing out”, is elevated. In this type of environment, you usually don’t have that kind of investor sentiment off of a bottom. Usually, investor sentiment is of “capitulation”, and the sell-off peaks, a la February/March of 2009. Additionally, based on the economic data and the earnings outlook, along with trends and risk in other capital markets, we tend to expect further declines and a retest or a decline below the previous low. But looking out 5 to 6 months, visibility is poor and uncertain. Market volatility remains very high. The Volatility Index (VIX) is still at 39, as of Monday morning.

We’ll see how this unfolds. Currently, capital preservation is an important component of an investment strategy, in our view.